"Taste of Cherry" is an Iranian film about a guy who tries to find someone to bury him after he commits a suicide. It may sound depressing but it is a great cinema and I highly recommend it, if you haven't have a chance to watch it. This post has nothing to do with the movie, and I don't have any such plans, in case I got you worried. I still plan to kick around for a while, fitting room ban drama notwithstanding. I just could not resist a title for some reason. I watch a lot of movies and I suffer from random film title association syndrome.

If you are a regular reader of this blog you may know that I love Liberty of London prints and specifically J.Crew button down perfect shirt in Liberty prints. With the previous round of new arrivals I posted that one of my favorite new items was Liberty perfect shirt in claire-aude in cherry. I decided to order it with the 25% off (plus 9% off cashback and 5% rewards), which brought the price to more reasonable level (although still expensive). 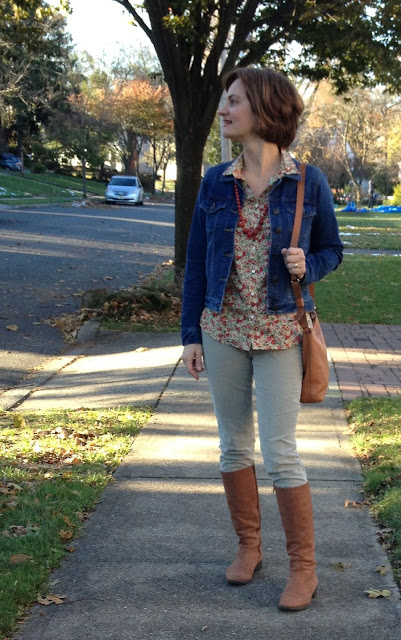 I ordered my regular size 6 and it fits TTS, like my other Liberty shirts (see more HERE). What I did not expect from the website pictures, was that there was so much green in the print. Actually, the same thing happened when I ordered Margaret Anne print, so now I know that the greens tends to recede in the pictures. I thought it was more of a creamy background with red and pink flowers. Even now, when I zoom in, the green looks more like light sage green, but irl it is a rather grassy medium green. 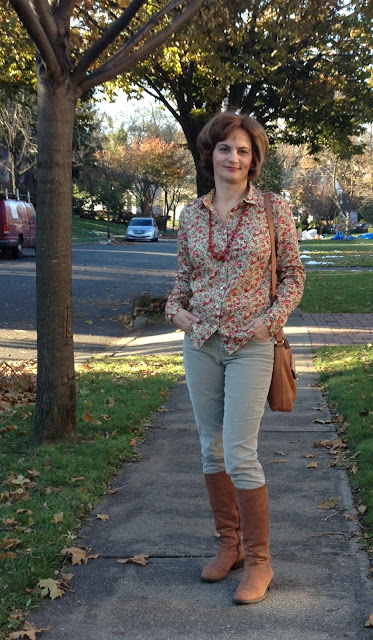 It is still pretty, just not what I expected. It is not that I don't like how the green looks on me, there is just something about the color itself that I have a problem with. Maybe it is that I consider green earthy and traditional, as oppose to urban and modern and this is how I'd rather think of myself?

With the green, the shirt has much more 'folksy' vibe to it, imo.  Instead of fighting it, I decided to double down by wearing traditional coral necklace from my place of birth (Krakow, Poland).

Here is the closeup of the print so you get better idea of the colors. As you can see the coral tones are dominant (the necklace is real coral so you can compare) but there is plenty of dark green. It is rather vibrant, don't you think? 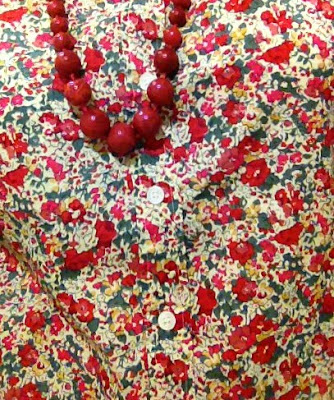 Anybody watched the "Taste of Cherry"?

How do you like the shirt?
Have you found that certain colors are not reflected well in pictures, even without photoshopping?

New comments are not allowed.