It may seem strange, but with all the shoes in my closet, I am missing a pair of tall black boots. I do own a pair of 'black' Glenbrae boots from few years ago, but they don't really read black to me, more like dark gray and I wanted a smooth deep black. I also have a pair of black Ryder boots that I love, but they are shorter and motorcycle style. And I have black high heel Noelle booties, but no tall boots.

I liked the Harper boots in the pictures, but they were disaster when I tried them on (see HERE). Anyway, I preferred a midheel, since I have many other flat boots.

Booker Midheel Boots  looked like something that may work for me, so I ordered them on sale with additional 30% off, which brought the price to reasonable level, especially with 5% rewards and 10% shopathome cashback. 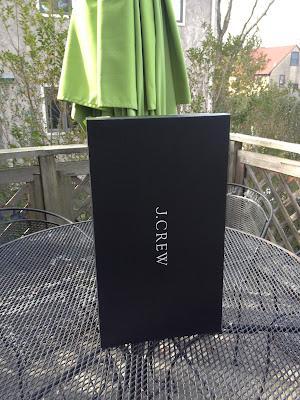 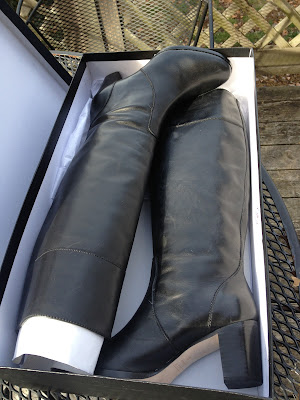 Rest assured, they were better wrapped, I took this picture later... 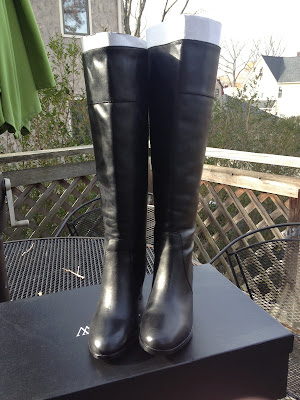 Well, they were black boots, alright... I am not sure what I expected, but they were just blah. If I spotted a pair of boots just like these on the shelf in department store (or Marshalls), I would not give them a second look. The leather is not stiff, but it isn't exactly soft of luxurious. It is just... black leather... 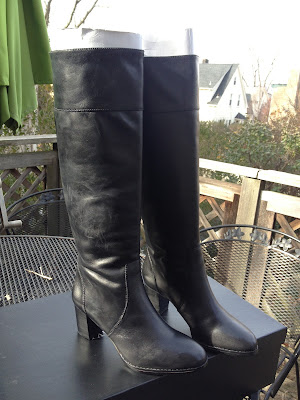 They will definitely scratch easily, in fact there seemed to be indentations just from trying them on. Are you supposed to try them on wearing soft cotton gloves? 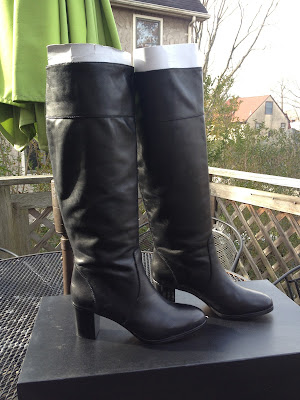 I have a high instep and most flat boots with no zipper are a no-no for me. I can never pull them on. But heeled boots are easier. Not so with these. They were very hard to get on. I finally managed and once on, they felt TTS and comfortable. Not sure if I could walk in them all day, but for a few minutes I had them on, I was fine. 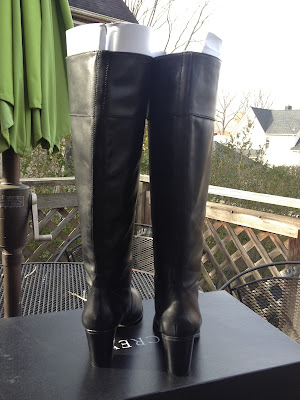 They do not have any shaping at the top so they have a gap between the top of the boot and my leg. It wasn;t as bad as with Harpers but it did not look great with a skirt. They will definitely be better with pants tucked in (if you can manage pulling them on, I did not even try). My calves are average width, so it will be worse if you have skinny legs. I decided I prefer boots that have some shaping or elastic at the top. Also, they should come with some tabs to pull them on. I probably just have to reconcile myself with the inevitability of zippers.

They are rather high and when I sat down they were rubbing off my tights and since they are pretty stiff it was bothering me.

All in all, nothing grossly wrong with them, no imperfections, no extra glue etc, but also nothing special. Maybe if they were close to $100?

Do you own Booker boots or ever considered them?

Do you have other similar black boots recommendations in similar price range?