The tale of three peacoats


I liked this peacoat when I first saw it in the Lookbook. I could not justify it, because I already own the Majesty peacoat in navy, but I almost regretted that I do (even if I love it), since I thought this would be a more stylish alternative. This coat is not available in most store but I spotted it in size 0 and 2 (only), which were probably returns. I decided to try on the 2, just to get an idea how it looks on me.

Size 2 was too tight, as expected, I am usually a 6. But it was not very tight or too wide in the shoulders, which makes me think it runs big. 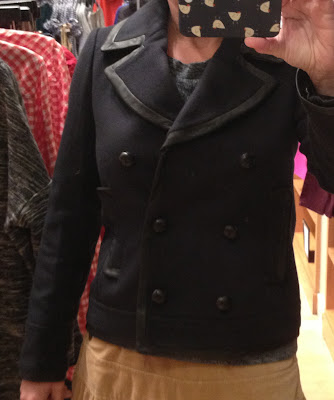 I was not impressed. The leather trim is nice but of course it would add to the price of dry cleaning. I liked the buttons better than the brass ones on Majesty. But the wool is more felted and fuzzy which I did not care for. The lining is navy and with no special details, while the Majesty this year is done in contrasting hot pink.

I did not realize until I tried it, that is is much more cropped shape than Majesty. I prefer the longer length.

Other than that, it fits nicely but I would have to see in in my regular size. I am afraid it would be much boxier then. 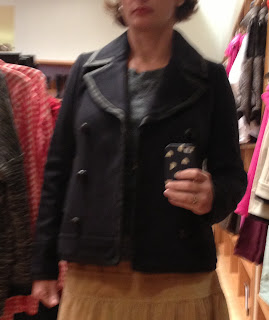 It looks good open, but that may also be due to being a smaller size. Overall, I don't think the coat is worth the extra money and I am back to loving my Majesty with no regrets. Yay!

The Tipped peacoat is a victim of pretty horrible styling on the website, at least imo. 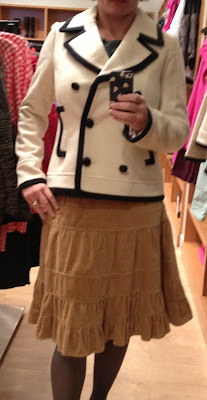 This coat has the same shape as the Collection leather-trim peacoat.

Size 4 fit about the same as Collection leather-trim peacoat in size 2, maybe just a smidge tighter. It was almost good, but I would like a little bit more chest room, so I would say it fits TTS. They did not have the 6 for me to try. 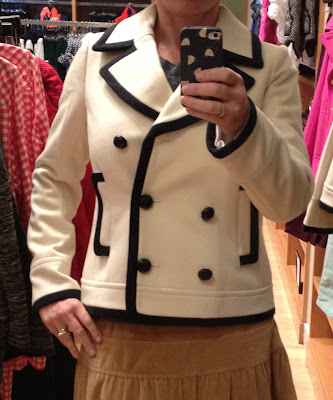 I don't like the high contrast of the trim. But I have to admit, I don't really like the tipping effect, both on blazers and coats. There is something very 'uniform' about it and the peacoat shape makes it worse.

See it also on my pal Ema, here.

I already own the Majesty, so I only wanted to compare 2012 version to the one I own and I would say it is about the same. I liked the pink lining, which is new this year. Mine has a navy lining. I had an attack of the prickly shoulder pads last year, but I just got them removed by the tailor and J.Crew picked up the bill. It was surprisingly inexpensive (because my tailor is 'ouch pricey'), I think it was no more than $15, maybe even $10. The coat looks about the same after the removal and I know some JCA's did it themselves. I do hope J.Crew fixed the issue but I would not count on it, despite their claims of being 'obsessed with quality'.


As you can see, this is a longer coat and has shiny brass buttons. I think it has a tighter fit than the tipped peacoats. You can see my review of last year's version HERE.

Are you a fan of J.crew peacoats? Do you own any?
Do you like/consider the tipped peacoats I reviewed?