A Day at Hyde Park, Emerson Fry and New Hair

What a beautiful Memorial Day weekend we are having! It is my perfect weather, sunny and crisp and not too hot. Yesterday we decided to drive up to Hyde Park, NY to visit the home of president Franklin D. Roosevelt.  Its a really great place to visit and I highly recommend it, even if you are not a history buff ( I am not). I thought I was going to see the house and garden which are beautiful, but it was the exhibit in the Presidential Library that blew me away.
I never really realized how visionary and progressive the whole New Deal and Roosevelt's presidency was and seeing it from current political and economical perspective was fascinating. We are still benefiting from so many initiatives set in place at that time: Social Security, minimum wage, 40 hrs workweek, SEC and Banking regulations, countless infrastructure and more. It is also interesting to think that in some ways we went backwards and have almost arrived where it started.

Roosevelt loved his childhood house and spend a lot of time here during his years of presidency. I never realized (just shows how little I know) that not only he was in wheelchair but that he was hiding it with great deal of effort. His presidency was a real triumph of the will if there ever was one. 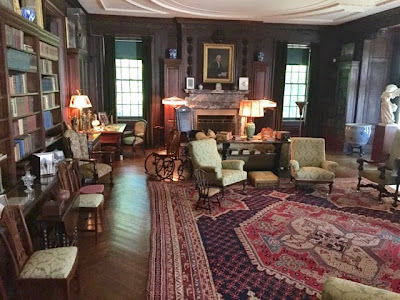 You can see the wheelchair in the back, it was made from regular wooden kitchen chair. 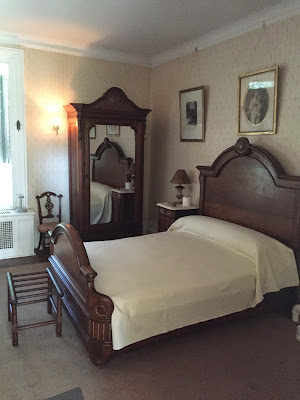 This is the room that he was born in, I spy the wardrobe similar to the one DaniBP was considering. 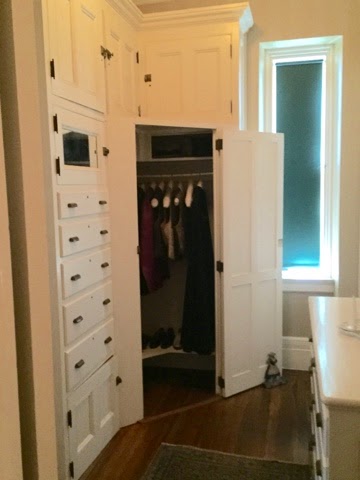 But this is the room that delighted me the most, walk-in-closet, who would have thought? 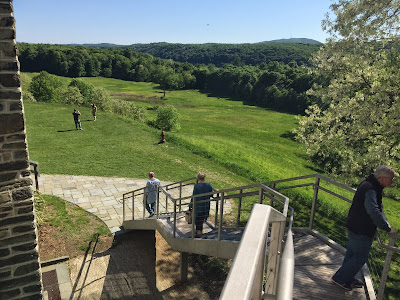 Sweeping view of the valley from the back of the house, priceless. 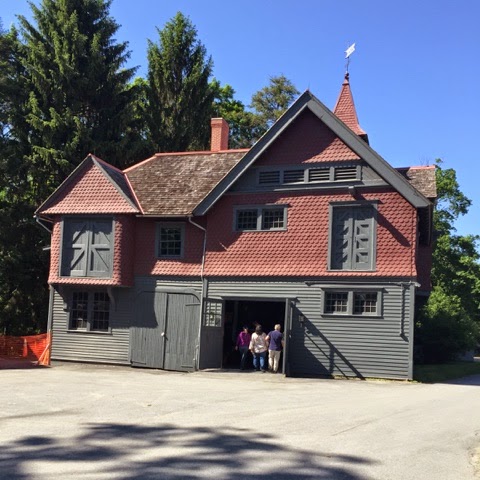 Of course there are stables. 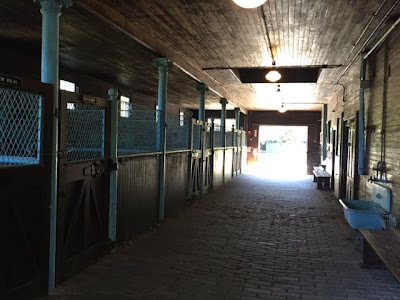 Eleanor Roosevelt's Rose Garden must be beautiful when the roses and peonies start blooming, I want to come back just to see it. 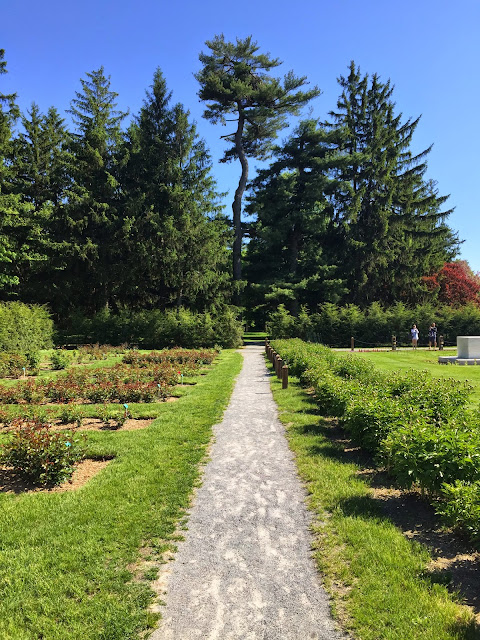 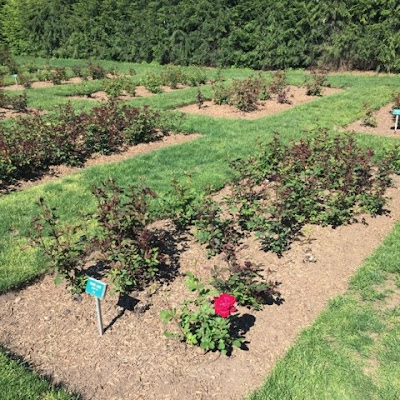 In the afternoon it got warmer and I could remove my jean jacket. It looks warmer in the pictures, but it was only low sixties, just shows you that I was determine to show off this Portia Top in abstract. I got it from Emerson Fry recently. It is sold out on the website but it may show up in outlet. Similar to other Portia Tops but this one is in silk (including the full lining). It's crazy expensive but I got it on major sale ($69). I love the quality of Emerson Fry! Now, I swear that the shorts were looking longer in the mirror, lol. I should wear them with a shorter top for better proportions. 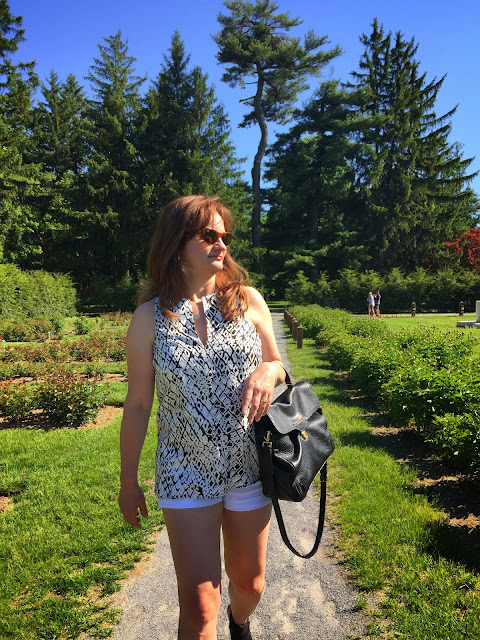 The 'Freedom From Fear' sculpture in the back of Presidential Library has an interesting story behind it. It was created by Edwina Sandys, granddaughter of Winston Churchill. Male and female human figures were carved from large section of Berlin Wall. I love how they are breaking out of barbed wire. In a way it is also a little ironic since both Churchill and Roosevelt have their indirect part in creating the Berlin Wall in the first place. 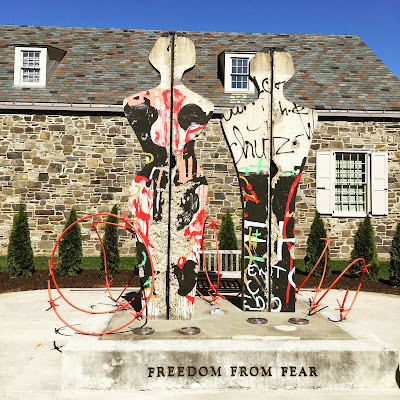 I can never resist a path flanked by trees and this one is no exception... 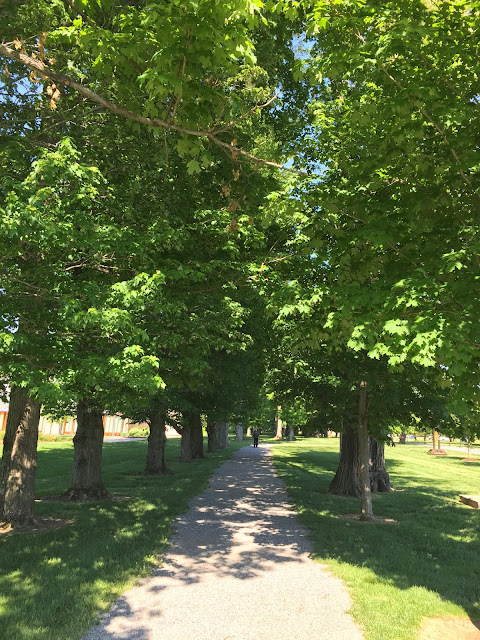 This shot in front of the house looks like it could've been somewhere in southern Europe, don't you think? 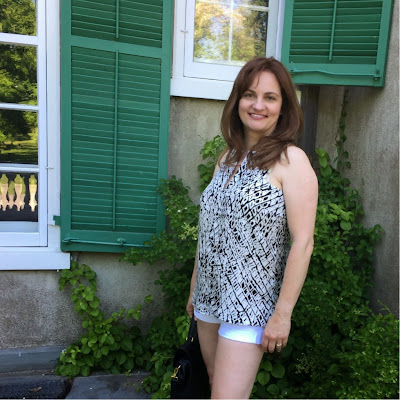 I did my hair a little darker last time I colored it. I think I like it, what do you think?

What are you up to this weekend?